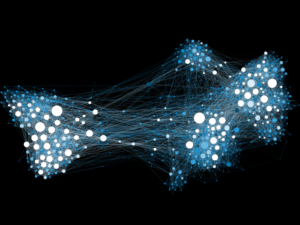 The big problem in generating entangled pairs over a link is the increasing “state decay” with increasing distance of the nodes; due to the no-cloning theorem it is also not possible to amplify the signal in between. Thus, it is not directly possible to stably distribute entangled pairs (including Bell pairs) over arbitrarily large distances.

To make this possible, however, entanglement swapping was developed, i.e. the transfer and concatenation of entanglements.

A Bell pair between two end nodes of the quantum network, i.e., a quantum E2E link, can be created by a continuous combined generation (stringing together) of Bell pairs along the link sections (with intermediate nodes). Each intermediate node along the path can link the two adjacent QuBit pairs (right/left side) and thus create a new entanglement between the QuBits on its two neighboring nodes.

This process of entanglement transfer proceeds as follows: In the upper part of the figure, nodes A and B originally share the (unknown) entangled QuBit pair-(X1,X2) and nodes B and C share the entangled QuBit pair-(Y1,Y2). But the goal is to achieve the entanglement of a QuBit pair between nodes A and C. To achieve this goal, the QuBit-X2 is teleported to node-C (see article in DFN-Mitteilungen No. 99), for which the QuBit-pair-(Y1,Y2) is used. For this purpose, node-B makes a Bell measurement on QuBits X2 and Y1, which destroys the entanglement between QuBit-pair-(Y1,Y2). Instead, QuBit-X2 is teleported to node-C with the Bell measurement and the bits for the Pauli correction and “re-generated” in QuBit-Y2, where QuBit-X2=Y2 is/remains still entangled with QuBit-X1. QuBits X1 and X2=Y2 are still unknown. The figure shows the result in the lower part.

In addition, the two bits of the Bell measurement process in node B still have to be transported further, since they contain information about the Bell measurement pair (X2, Y1) (see Figure 2 in the section “Teleportation” in the article in DFN-Mitteilungen No. 99). Quantum nodes that generate remote entangled pairs via entanglement swapping are called quantum repeaters.

The genesis of entanglement

The problem of quantum connectivity is closely related to the generation (and distribution) of Bell pairs. So how are Bell pairs generated and brought to the endpoints? In a quantum network, the entanglement is generated locally; subsequently, the displacement of one or both entangled QuBits to their destinations takes place within the framework of quantum channels.

Photons are a good “raw material” for this purpose: they have rather little interaction with the environment (i.e., a low tendency to decoherence), they can be processed with many standard optical components, and the transmission takes place at high speed (speed of light) and with little loss. However, photons cannot be stored; their flying QuBit state (flying QuBit) must therefore be transferred to a matter QuBit (e.g., an electron spin or an atomic state) for further processing using transducers.

There are three basic schemes for creating heralded entanglements between two quantum nodes:

The midpoint scheme is so far more robust to photon loss; in the other two schemes, nodes have more control over entangled pair generation for this. This offers much room for different technological developments.