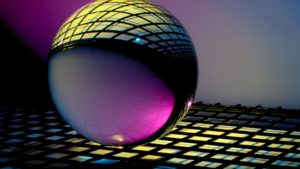 The digital world of classical computers – as we know it today – can basically be represented by nothing other than a sequence of binary states, ones and zeros, on and off. The state of these so-called bits is always unique, the light is always on or off. A bit can never have two states at the same time.

Quantum computers are also based on the states “1” and “0”, but these are encoded with quantum mechanical properties of atoms, electrons or even photons. These are then called QuBits (quantum bits). Now in quantum mechanics a QuBit can take not only absolute values of one and zero, but also mixed forms in the two-dimensional space. This superposition is called superposition.

However, these QuBits are also extremely sensitive information states, which have to be preserved for a certain period of time with a currently high technical effort. At the present time (spring 2021), this means maintaining a quantity of up to 100 QuBits over a time span of seconds or minutes.

The influence of external magnetic or electric fields or e.g. high temperatures or interactions with other QuBits (crosstalk) cause QuBit errors, which can only be corrected to a very limited extent.

Now there are different possibilities to generate and preserve QuBits by physical-technical means. QuBits can be operated with superconducting materials, be stabilized in ion traps by electromagnetic fields, or be generated e.g. by orthogonal polarization of photons, by manipulation of the atomic nucleus spin and semiconductor structures.